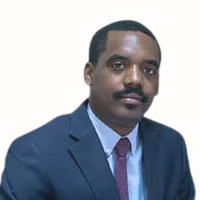 Graduated in Economics and International Relations at the University of the West of England - Bristol, in 2011. After a first experience in finance including mergers and acquisitions for YOS SA, Perenco Oil and Gas Gabon and ASDAN UK, he decided in 2013 to specialize in the world of hydrocarbons by a Master of Science in Oil and Gas Enterprise Management at the University of Aberdeen - Scotland (UK).

In 2014, he joined Gabon Oil Company – GOC, as a trainee to participate in the development of the company's oil assets. His sense of determination and his application allowed him to climb the ladder. As an oil economist, he does tax modelling of oil permits and participates in the acquisition of the MBOGA II permit and the development plan of the Remboue permit.

In 2015 he took over the commercial responsibilities of creating GOC's Trading and Marketing department and managed the VITOL account for which he reconciled more than $640 million. He then joined Gabon Oil Marketing - GOM, the first subsidiary of the Gabon Oil Group, in September 2016, he developed the system for monitoring trading and invoicing operations to the client. In July 2017 he is Managing Director of Gabon Oil Logistics and Services, in charge for GOM of trading of unstructured products and shipping operations and handling GOC’s logistics.

In 2019 he was appointed Chief Executive Officer of Gab'Oil to put this new subsidiary into operation, his qualities as manager and negotiators allow him to conclude a 15-year contract for the supply of more than 10 million litres of Diesel per year and to set up Gab'Oil's distribution network with the installation of 5 private service stations offering intelligent and integrated fuel management and vehicle fleet management solutions. He then heads the New Strategy and Economic Intelligence Business Department where he develops and structures the acquisition strategy of non-operated oil assets including 6 million barrels per year of production. From September 2020, as Head of the Gas Department, he is leading GOC's gas strategy and Mboumba's Micro LNG Pilot Project in partnership with the World Bank's GGFR, one of the major projects of the new organization that will eventually allow GOC to decarbonize its oil production from the Mboumba permit while unlocking the value of flare gas.

In January 2021, as a Consultant and Expert, he proposed to the Presidency of the Gabonese Republic the implementation of a national project around the valorisation of natural gas. He is appointed on behalf of the Government, Project Manager for the Gas Strategy Task Force, a unit of the National Council of the Transformation and Acceleration Plan (PAT) of the Presidency of the Republic of Gabon. He leads the work of Gabon's oil and gas operators and other stakeholders around a common gas strategy for the valorisation of flare gas and the development of gas discoveries and structuring of the domestic LPG market. He is organizing the first Gabonses summit on Oil, Gas and Energy Transition from 20 to 22 October 2021 so that the national gas strategy is popularized, and each stakeholder can present their work.

He works in consultancy and expertise in Gabon and Central Africa with companies and governments to support them on aspects related to flared gas valorisation, gas to power, energy transition and hydrocarbon trading.